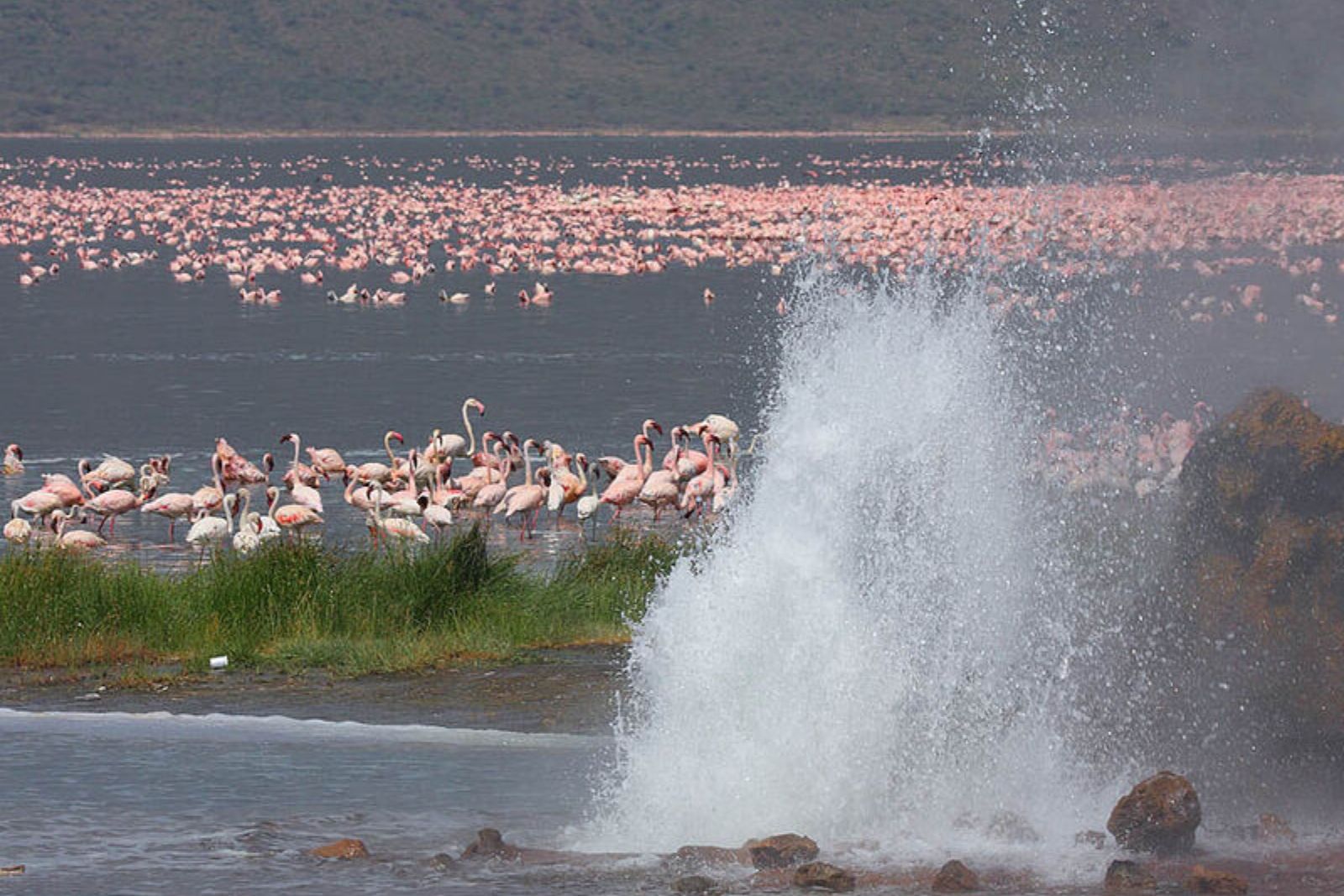 Ultimately, the Kenya Lake System in the Great Rift Valley is a natural property of outstanding beauty. Hence, it comprises three inter-linked relatively shallow lakes. These include; Lake Bogoria, Lake Nakuru and Lake Elementaita in the Rift Valley. Accordingly, all these lakes covers a total area of 32,034 hectares.

Moreover, this Lake district is composed of three alkaline lakes and their surrounding territories. In fact, these lake system includes the famous Lake Nakuru as well as Lake Elementaita.

Consequently, it covers 10,700 ha within a catchment basin that forms the arid and semiarid areas. However, although the area is protected, it is vulnerable to siltation and pollution. Indeed, the river has only one major river that feeds it. Meanwhile, only one river drains into the lake originates on the northern edges of the Aberdare ranges.

Besides, due to it’s small size, this small reserve can only be visited as a Lake Bogoria day trip. As a consequence, this is why the park is on few tourist itineraries. However, it is slowly becoming a flamingos destination since they left Lake Nakuru after the flooding of 2012. In fact, this because most of the reserve consists of a large, algae-rich lake. In fact, the lake is alkaline, feeding blue-green algae which in turn feed flamingos. At times the number of flamingos feeding in the lake may be as high as two million

Consequently, the Lake Bogoria day trip is now one of the best places to see big flocks of these birds. Nevertheless, do note that there is very little wildlife. However, you may still come across mammals. Indeed, these include, buffalo, zebra, baboon, warthog, caracal, spotted hyena, impala and dik dik.

The reserve’s main appeal lies in the scenery and the flamingos. Obviously, the movement of the flamingos depends on water levels and algae concentrations. In addition, the reserve is also a refuge for greater kudu however, these stately animals aren’t seen very often. Conversely, there are warthogs, Kirk’s dik-dikq, Grant’s gazelleq and impalas.

The scenery of Lake Bogoria  is breathtaking. In fact, the road runs along the lake at the base of the Rift Valley escarpment. Meanwhile, Loburu Hot Springs is an interesting landmark and a reminder of the intensive tectonic activity in the area. Finally, the road climbs up to viewpoints from where the dramatic scenery can be observed on a larger scale.

Consistently warm temperatures are the norm at Lake Bogoria, thanks to its equatorial location. As such, it does get colder higher up the escarpment, but this area is off-limits to visitors. The weather in the Dry season (September to February) is very agreeable, though flash floods can show up at short notice. As for the wet season, it mainly rains in the afternoons.

Flamingos can be seen at the lake throughout the year. But it’s probably best to see them in the Dry season (September to February). Obviously, this is so that you can avoid the overcast skies and rain interruptions of the wetter months. However, the only drawback is the dust that can cloud the air at this time.